In the 1920s half of New Hampshire's population was foreign born with many residents having immigrated from Canada, Ireland, and Italy. Manchester was lovingly called la petite Canada and the French section on the west side, Mcgreggorville was nicknamed Notre Dame.
In Manchester there was a French Opera,  French Orchestra and St. Mary's Church was adorned with the finest architectural craftsmanship in the city.
There is still a strong presence of French-Canadian cultural heritage and arts in New England today. On June 16-18 in Biddeford, ME a New England wide festival, La Kermesse will celebrate Franco-American culture with food, craft, stories, and music. Linda Pouliot, a singer on the NH State Council on the Arts Traditional Artist roster will perform classic French standards. She will share stories of growing up in Berlin, NH, where she spent Sundays with her family sharing food and cultural traditions.
Pouliot ensures us, "If you do not speak French, no worries, songs include the English version as well.  Beautiful song arrangements by Charlie Jennison, and melodies sure to please,"
She will be accompanied by seacoast artist Charlie Jennison on piano, Nate Therrien on bass and from Rob Duquette from Saco Maine.
The New Hampshire Humanities Council recently held a day-long symposium of speakers in Moltonborough, NH on Franco-American Life and culture in NH. The symposium accompanies an exhibit of photos and text at the Castle in the Clouds that will be available to travel around the state. 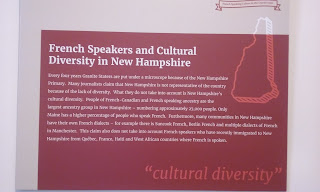 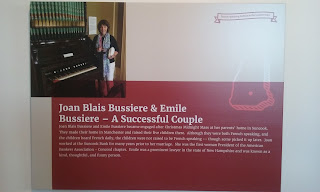 If you would like to learn more about your own heritage, the NH Historical Society will be sponsoring a genealogy workshop focused on French Canadian ancestry on June 25th.

Below: video of Sandy La Fleur, Paul Lizotte, and others performing French Canadian fiddle tunes with a jig doll or gigeux at the NH Preservation Alliance Old House & Barn Expo.