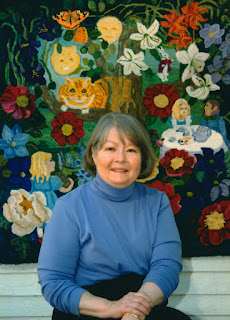 The New Hampshire State Council on the Arts is pleased to announce Ann Winterling as the recipient of the 2015 Governor’s Arts Award in Folk Arts.

Ann Winterling is a master of the traditional art of New England rug hooking, a craft that dates to the early 1800s. A history of the craft shares the efforts of ordinary women to bring beauty, comfort, and warmth into their homes. 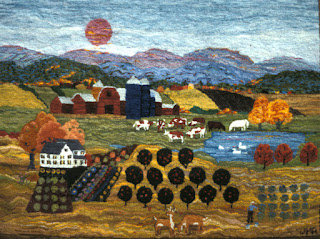 Ann has been hooking rugs for over 40 years beginning as a young mother when she took classes from the late Hallie Hall. She hooked with Hallie, who had learned from her own grandmother, for over twenty years. In reflecting on her years with Hallie, Ann recalled that, “It was so inspiring and uplifting to go there for class . . . After a while we had all learned to hook but we just couldn’t stop meeting together and doing things together.” Ann also studied with other well known traditional fiber artists including Mary Sheppard Buron, and Mary Anne Wise. She in turn has generously shared her cumulative knowledge with countless others throughout New England and the east coast. 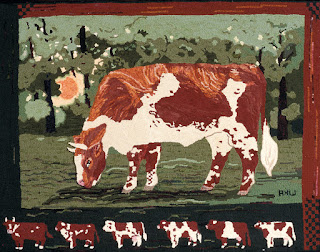 Today, Ann's work is well respected throughout New Hampshire, New England, and nationally.  Her fine craftsmanship is noted for her ability to create personal, yet iconic, images of the New England life. Her work has been included in shows at the Museum of Folk Art in New York City, the Cahoon Museum of Folk Art in Massachusetts, the Worcester Center for Craft, the League of NH Craftsmen, and she was one of three featured traditional artists at a recent exhibit at the Shelburne Museum in Vermont.  Ann has been featured for her artistry and leadership in New Hampshire Magazine, Rug Hooking Magazine, the newsletter for the Association of Traditional Hooking Artists (ATHA), as well as numerous articles and publications featuring the tradition of hooked rugs. 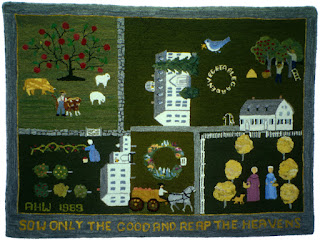 A total of 6 awards will be presented by Governor Maggie Hassan at a celebration on October 21 from 5-7pm at the New Hampshire Institute of Art in Manchester.
Posted by Julianne Morse at Wednesday, October 21, 2015