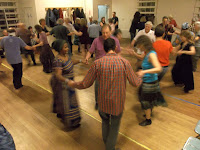 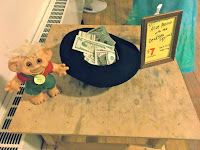 
Schedule: 8-11 p.m., third Saturday of each month except July and August

David Harris, organizer of the Concord contra dance, took on his role at a difficult time—in September of 2001. In the wake of the events of September 11, he wasn’t sure whether they should hold the first dance of the season. “I got in my rowboat,” he recalls, “and went out and did some thinking, and decided, ‘We have this tradition that goes back a couple of hundred years, and I don’t want anybody to destroy that…. We had the dance and carried on the tradition in spite of what was going on in the rest of the world.” Since Harris began organizing the dance, only one dance has been cancelled. 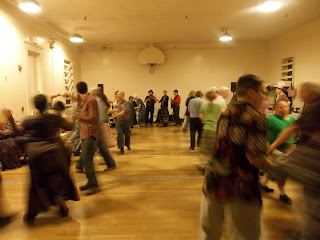 The Concord contra dance began as a monthly series in West Concord, New Hampshire with its first dance on September 24, 1988 at the West Concord Community Center. The hall had a sprung wooden floor and had been built by Scandinavian immigrants who had moved to the area to work in the nearby quarries. “And they knew how to build a dance floor!” says David Harris.

Dance founder and organizer Eve Kitchen did the calling each month, bringing in a guest caller from time to time. The house band, the Hotcakes, consisted of a fiddler, mandolin player, and keyboard player. Two members of the Hotcakes, Mark Doughty and Bob Shanahan, still make occasional appearances at the dance. The dance was a favorite for local families.


Eve Kitchen ran the Concord dance from September 1988 to January 1994. By then, she was living in Massachusetts, so the dance took a several month hiatus before dancer Chris Derby (then Chris Glover), who missed the dance, took the reins and brought it back in November 1994. 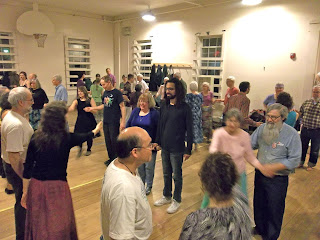 Chris Derby continued to run the dance from November 1994 until June 2001. She met her husband, Jim Derby, at the dance. “She was sitting at the desk collecting money,” said David Harris, “and he walked in the door. She said, ‘I’m going to get that guy!’” 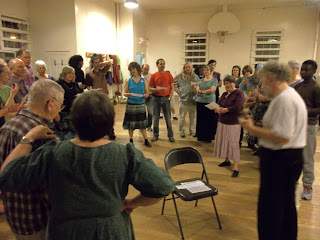 In September 2001, David Harris became the organizer of the dance. The September dance inaugurated a new tradition: the monthly sing-along. At the end of the evening, the band began to play America the Beautiful, and the dancers sang along. A few months later, in December, caller and fiddler Dudley Laufman led another sing-along. The idea stuck, and today the sing-along takes place at the end of the mid-evening break. “There are some parallels between the singing and the dancing,” says Harris. “You’re in a group, and you’re all striving to make this thing work. Everybody does their little part to make it happen.”

Another monthly tradition in Concord is the dancing of Chorus Jig. This “chestnut” (as historic contra dances are sometimes called) has a history that dates back over 200 years.

In the dance’s earlier years, dancer Donna Maglin attended regularly. Maglin, who was blind, was an excellent dancer, Harris recalls.


Pianist and contra dance legend Bob McQuillen played at the Concord contradance several times. Harris remembers one night when McQuillen, well into his 80s, hefted his keyboard onto his shoulder and climbed up the stairs to the hall. “He scared me so much,” Harris says. “I didn’t want him to meet his end at our contra dance.”

The crowd at the Concord contra dance is diverse in age and experience level. In addition to long-time dancers, the dance has recently begun to draw a young adult demographic, including high school students, college students, and twenty-somethings. Harris says that the environment at the dance is relaxed and fun. Contra dancing in Concord is not a “competitive sport.”

The dance brings in a different band and caller each month. All dances are taught. Most dances called in Concord are contra dances, with some circle dances and square dances. All kinds of contradances are called, from traditional dances to modern dances, and the music is diverse as well. As is traditional at many New England contra dances, there is a waltz before the break and at the end of the evening.

Dancers of all ages and levels of experience are welcome. “I always tell people, ‘Don’t just sit and watch. Get in there and do it. As long as you can walk, you can do this,’” says Harris.