What is one thing that remains constant in the world? Change.

There is a long tradition of contra dancing in New Hampshire and like many traditions, things change. Today, you can swing and pulse at techno contras under black lights to loud electronic renditions of traditional music. You can attend hot contras that spin dancers so fast that it rivals the toughest gym workouts. And most likely, the dance that you attend will be run a little differently than the dance that took place in your town 20, 30, or 50 years ago. 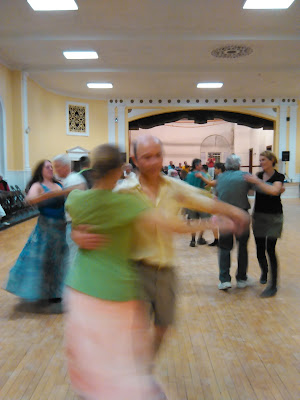 New generations of community members want to partake in local traditions, but also want to evolve practices so they are fun and relevant among friends. There's a balance between wanting to participate in activities of our parents and grandparents, and helping to shape a new form of community entertainment.

Most dances in New Hampshire have seen attendance highs and lows with organizers changing hands every few years. Eighteen dances are featured on the NH Folklife website, all with their own unique history and place within the cultural fabric of their communities. Some dances have been taking place regularly for over 100 years, some have just started up when a neighboring town dance failed to attract an audience. The stories of these dances, and the stories of eighteen New Hampshire communities can be found on the Folklife website through interviews Elizabeth Faiella conducted with local dance organizers in the spring of 2015.


"Last spring, when Cuckoo's Nest announced the end of its dances and when Northern Spy decided that it, too, was tired or organizing its own series, we were concerned that this might spell the end of Norwich dances. As we had hoped, though, many community members stepped forward and the dancing will go forward. There's now a new website promoting dances on 2nd and 4th Saturdays, as well as an active Facebook page. The organizers are interested in presenting a mix of programs, some featuring local musicians and callers and some the bigger-name traveling bands and callers. I'll still be calling locally from time to time, including some summer dances at the Pavilion, and the various musicians from Northern Spy may appear in different configurations. In the meantime, support your local dances!"

The tradition of social dancing in NH has been vibrant since the colonial era with different styles of dancing coming into fashion. In the mid 1800s English Country Dancing was popular, the first 4 decades of the 20th century fancied square dancing with young couples courting each other at dances. Contra dancing has only been the social dance flavor of choice since the 1960s. Styles change, musicians add slight variations to tunes, venues rotate. The dance goes on.