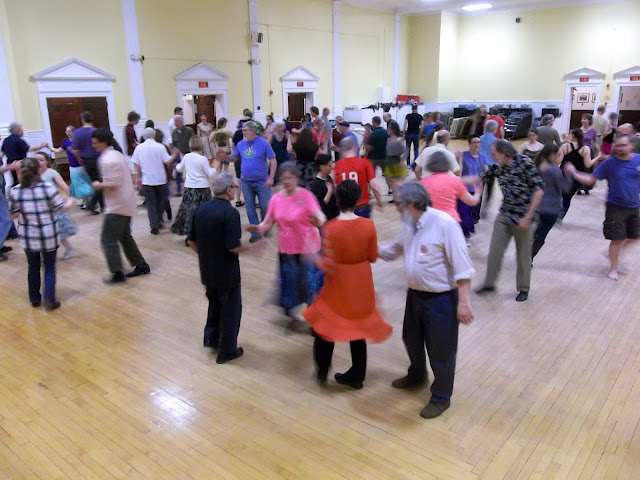 The first iteration of the Dover dance was going strong at the Dover City Hall in the 1940s and 1950s. Caller Phil Johnson led the dances, along with fellow callers Mal Hayden and Guy Mann, and the band played without a sound system. The dances drew a crowd that filled the large hall on a regular basis. 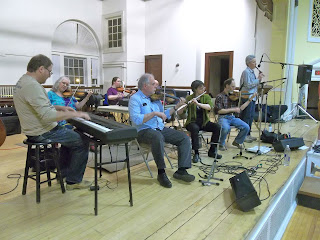 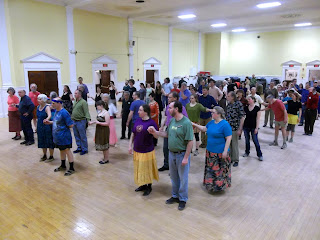 The dance program consisted of three squares and a contradance, repeating that pattern until near the break, when dancers would do folk dances such as Road to the Isles and the Boston Two-Step. After the break, the pattern would repeat. Among the dances commonly called in Dover were traditional contras such as Lady Walpole’s Reel, Lady of the Lake, Sackett’s Harbor, Petronella, Hull’s Victory, and Money Musk; and singing squares including My Little Girl, Marching Through Georgia, Crooked Stovepipe, and Darling Nelly Gray. Some of these dances, which Johnson taught current dance organizer Peter Yarensky, are still called in Dover. 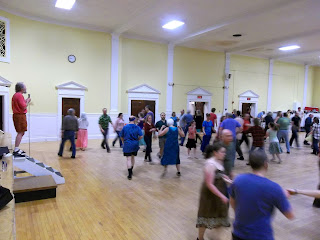 The current Dover dance originated with the Lamprey River Band, which in turn began as a jam session in the 1980s. A group of musicians, who had been playing together weekly, organized a dance in August, 1983 to benefit the Newmarket Town Hall, where the main contradance in the Seacoast Area was. “And we had such a good time that we decided that maybe we should keep going,” says Yarensky, current dance organizer and member of the band.
The original band members were Peter Yarensky, Steve Panish, Sarah Hydorn, Sarah Mason, Dave Cousineau, and Rick MacAulay, among others. Modeled after the Canterbury Orchestra and the Maine Country Dance Orchestra, the band played mostly common repertoire New England tunes.
The band got hired for a few more dances, and “with considerable discussion,” the musicians chose to call themselves the Lamprey River Band. The band practiced weekly at the Durham Children’s Center. “Since it was a daycare center, most of the chairs were quite low, so there we were, all sitting there practicing on chairs that were two feet off the ground,” says Yarensky. In 1985, Yarensky and fellow band member Sarah Mason decided to learn to call dances.
The band members soon decided to make their band practice into an open jam session once a month, and then Yarensky suggested that they turn their open jam session into an open dance where anybody would be welcome to come play music or call.
The first dance was in October 1986 in the Madbury Town Hall. Admission was $2. The dance took place Thursday nights so as to avoid interfering with other dances in the area. It gradually grew, with more and more sit-in musicians and guest callers, until it became the largest dance in the area.
The dance relocated for a while to St. Thomas Episcopal Church in Dover, before moving across the street to its current location, Dover City Hall, in the early 1990s. Pianist and contradance organizer Marianne Taylor played piano with the Lamprey River Band for years. Dancer Paul Kanaly, who used to dance to the calling of contradance legend Ralph Page, danced in Dover until he was in his 90s. Caller Chrissy Fowler, now a well-known New England contradance caller, began her career in Dover as a guest caller.
Over the years, Yarensky says, there have been some lean times for the Dover dance, especially in the late 1990s. “We had a period of two or three years when it was only occasionally that we would make money,” he says. “Sometimes we made four or five dollars apiece if we were lucky. And sometimes we would lose $20-$50 in an evening.”
But these days, the dance draws a considerable crowd. The atmosphere is friendly, with some time between dances for dancers to talk and mingle. Though for a while there was a mid-evening break, it was eliminated when the hall required the dance to end earlier so as to clear the hall by 11 p.m. The age range and experience level of dancers in Dover is diverse, and University of New Hampshire college students often attend. Beginners are welcome.
The Lamprey River Band now includes Peter Yarensky, calling and hammered dulcimer; Sarah Mason, calling and penny whistle; Sarah Hydorn, flute and penny whistle; Steve Panish, fiddle; and Burt Feintuch, fiddle. The band is joined frequently by Bill Zecker, piano. Music includes traditional tunes from the New England, Irish, and old-time Southern traditions.
Yarensky and Mason usually call at the beginning and end of the evening, but they invite guest callers to call dances throughout the night. Because guest callers are welcome, many different types of dances are called in Dover. Yarensky tends to call more traditional contras, or “chestnuts,” and singing squares, while Mason usually calls dances that are more modern.
The guest calling tradition has caused the Dover dance to become a gathering place for many local dance organizers and callers. Sometimes nationally known callers who are planning tours in the area will come by and call a dance or two. 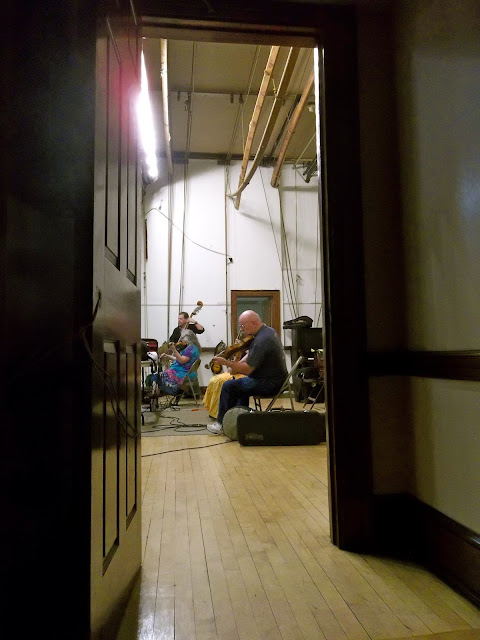 Every month, the evening begins with a dance called Lady Walpole’s Reel, danced to a tune titled Fireman’s Reel. The band also plays the tune Road to Boston at some point during the evening—just to exasperate one of the band members, says Yarensky. “Sarah Mason at one point said that she was tired of that tune, so Burt [Feintuch] decided to make sure he was going to make sure to play it every time, usually as a surprise sometime later in the evening.”
When the Smithsonian Folklife Festival featured New Hampshire in 1999, the Lamprey River Band was invited to play on a the Smithsonian Folkways Recording created in honor the occasion. The recording is titled Choose Your Partners: Contra Dance and Square Dance Music of New Hampshire.
Source: Peter Yarensky and Emeline Dehn-Reynolds, interview by Elizabeth Faiella, April 2015