Researched and written by Elizabeth Faiella 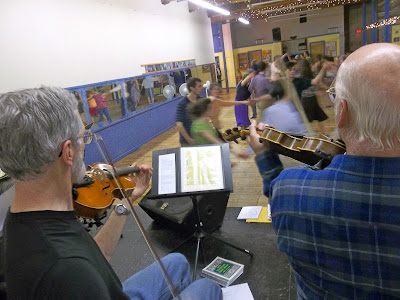 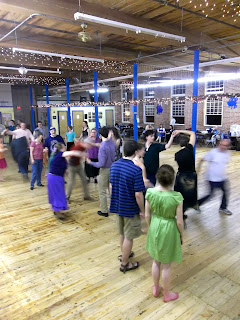 Many community social dances are held in old town halls, but in Manchester, things are a little different: the dance is held in an old, refurbished mill building, one of the historic buildings in Manchester’s Amoskeag Mill complex. “Here, with the warm brick and worn wooden floors, it just has a feeling of New Hampshire,” says organizer Paul Lizotte. “Town halls are synonymous with New Hampshire, but also the mill buildings.”


The Manchester or “Mill City” contra dance was founded by Chris Weiler in about 2005. Weiler was a caller, looking to call more regularly. He approached the owner of the Mill-A-Round Dance Center about the possibility of starting a dance there. The owner agreed, and the dance has been held there ever since. The Dance Center is home to classes in other forms of dance such as square dancing, Zumba, and line dancing.
For the next four years, Chris Weiler called the dances with a different band every month, including a number of Boston-based contra dance musicians. Then, in 2009, Weiler was planning a move and expected to give up the dance. He mentioned this to fiddler Paul Lizotte, who was playing in one of the visiting bands. Lizotte decided to take over organizing the dance, and set up a new system, modeled on the band Yankee Ingenuity’s dances at the Concord Scout House in Concord, Massachusetts: a house band, with a guest musician each month. He also hires a different caller each month, mostly people from the New Hampshire and local New England area, such as callers Lisa Sieverts and David Millstone. 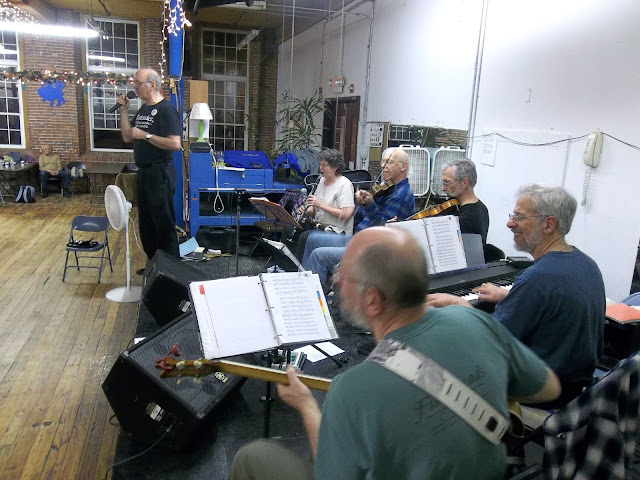 The house band is called JumpStart, and over the years has included Paul Lizotte, fiddle; Victor Troll, piano; Ray Salvo and Nancy Fiske, clarinet; and Gene Albert, bass. The band plays a mix of Quebecois, Irish, and old-time music. Their goal is to be a mix between a traditional-sounding band and one of the more modern, so-called “hot” bands. The musicians of JumpStart, Lizotte says, “love melody but love to improvise, and adapt, and play harmonies…. We like to play off each other.” Lizotte says the band strives for a danceable driving beat, plus an element of surprise: “When people are listening to a tune eight times through, there’s got to be something in it that’s compelling, or something in it that gives that little shock of surprise.” 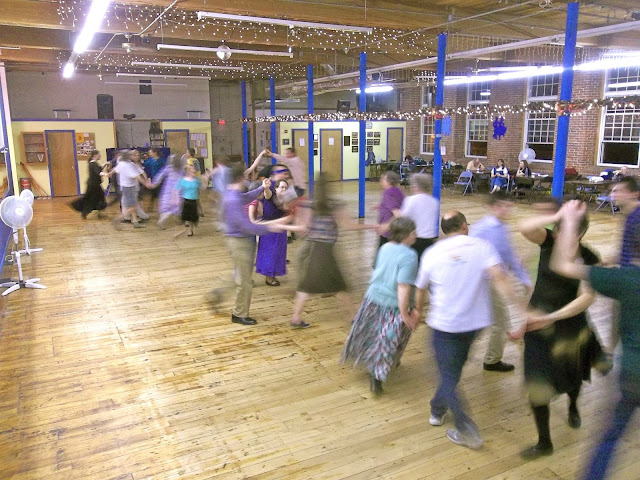 Lizotte says that the guest musician and house band arrangement lends a novelty to the band’s sound each month. “When we have fresh faces, fresh instruments, fresh interpretations, it keeps the band on its toes and also gives some variety for the dancers,” he says. There’s a financial benefit as well—the resident band plays for free, which leaves enough money to pay the guest musician and the caller. Plus, having a house band makes scheduling easier: Lizotte just has to find one musician, rather than a whole band, and if the musician has to cancel for some reason, there is still a full band available to play.
“One of the great things for me has been the opportunity to play with really fine musicians,” says Lizotte. Guest musicians have included members of the Orzechowski family, Rodney Miller, and Randy Miller, among others.
A mix of modern and more traditional dances are called. Because a different caller leads the dance each month, the dance program differs from month to month.
About 30-60 people come to the Mill City dance from month to month. The dance is intergenerational, drawing dancers of all ages. Recently, more young people have been attending the dances, including some AmeriCorps members in the area for the summer, and groups of college kids. Lizotte says that young people are discovering contradancing as they’ve “suddenly found that this is so retro that it’s cool.”
“Dances should be community dances, especially in New Hampshire,” says Lizotte. He says that the dance has built up a strong community of attendees over the years, who come to the dance for its welcoming environment and to visit with friends. “Sometimes we have to tear them away from the break because they’re having so much fun interacting with the people they come here to meet,” Lizotte says.
At the same time, it’s a dance that welcomes beginners, and Lizotte says the more experienced dancers in Manchester try to convey the fact that contra dancing is accessible and fun at any level. Some of the dancers wear “Dance Angel” name tags. “If you’re a designated Dance Angel, then you are in charge of taking care of new dancers,” says Lizotte. Dance Angels dance with new dancers—and prevent them from dancing exclusively with each other—to guide them through the dances and help them learn the basic steps. The dance has a beginners’ session at 7:30, and easier dances are usually called earlier in the night. There’s a break for refreshments partway through the dance. “In the second half, we let it rip,” says Lizotte.
The Dance Center, in a mill building near downtown Manchester, has its original wood floor, now refinished, with brick walls and a high ceiling. “For a traditional dance, it has a traditional setting,” Lizotte says.
The Manchester dance used to feature a “dance medley,” in which a series of callers each call a dance four or five times through, before passing the microphone on to the next caller, who calls a different dance. Contra dance medleys have no pre-dance walk-through, and so they require a more experienced crowd of dancers.
To Lizotte, contra dancing is a “tradition that still has some spark and pizazz.” He says it has always been about community, and that’s still true today, although the tradition is evolving. “People are carefully finding their way—how to make it relevant, how to make it exciting, without losing track of the community spirit at the heart of contra dancing. You dance with everybody and you’re strongly encouraged to dance with other people, so it’s community building.”
And although contra dance music varies from dance to dance, Lizotte says that the common repertoire is another thing that brings contra dancers together. “It’s a community of tunes…. People hear these tunes, and they may be modern tunes, but they’ve heard them before, and there’s this recognition.”